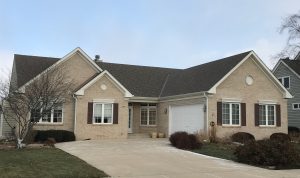 I had Mike Pierce come out to First United Methodist Church of Westmont because of a myriad of water issues pertaining to the roofs of the church which included water damage to the ceiling tiles, drywall and even mold growing in certain areas. Mike came out, assessed the situation and came up with a plan to fix the roof leaks and to return the interior space to a safe and usable condition.

He first addressed the leaks coming from the roof by installing a coating system to the roof over the office section which previous repairs by other parties did not fix. We also had another roof area which was too far gone to do a roof coating, so he replaced that roof as well. Our gutters were clogged with leaves and debris so his crew cleaned those out to allow the water coming from the roof to drain away from the building.

Once the roof issues were addressed, another crew came in to address the interior portion of the church. They installed a French drain around the perimeter of our courtyard to keep water from entering and flooding the basement portion of the church, cleaned up the water in the church and gutted out the water damaged ceiling tiles, drywall and carpet. They then treated the moldy areas of the church and had it professionally tested by a third party to verify that they had remedied the situation. They then replaced the drywall, ceiling tiles and carpet to make the space as good as new.

I highly recommend M. Pierce Roofing for all of your roofing and water remediation needs.

I contacted Mike about a leaking roof on a house I was selling in the Rockford area.  Mike went out and looked at the problem area and determined that I needed new gutters installed because some of my gutters were sagging so bad that water was pouring down the side of the house and getting inside.  I went ahead with the work and it was scheduled right away and done on the date promised.  There were no hidden fees and the clean up of the yard was excellent.  After the installation of the gutters, the leak into the home stopped.

I am very happy with the work done and highly recommend M. Pierce Roofing for all of your exterior remodeling needs. 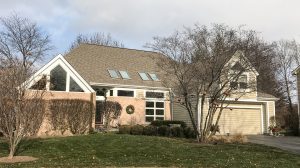 This is a testimonial for the outstanding roofing job done by Mike Pierce and his crew.  Our roof was storm damaged and needed an appraisal for repair or replacement.  After contacting Mike Pierce an inspection was done along with a written plan and appraisal determining that a complete replacement was needed.

The job was scheduled and completed in a timely manner along with all the clean-up needed.  We would recommend M. Pierce Roofing without hesitation for any and all roofing needs.  Mike stands by his work and is well known in the Fox Valley area for being honest and reliable.

George and Donna B
Aurora